Braun is the leading foil shaver manufacturer in the world and not without a reason. What makes them stand out is their innovation. In 1962, Braun released its Sixtant series and SM31 smashed all previous sales records by selling more than eight million units.

To mark the 50th Anniversary of Sixtant, Braun released Series 5 in 2012 and this too has been a widely popular series. It essentially lies between the entry-level Series 3 and more higher-end series like 7 and 9. However, performance-wise, it is closer to higher-end series than series 3 and this is what makes it a worldwide best-seller.

To keep its users enchanted and keeping up its innovative traditions, Braun, over the years, has introduced various upgrades in the Series 5. At the turn of a new decade, Braun released a new Series 5 50 in 2020 which at the moment is only available in the USA. Will this be released worldwide remains to be seen. The shaver at hand, the 5020s, is part of this newer series.

It is noteworthy that before this new addition, Series 5 was divided into an old and newer series. In this, older models used the 50 suffixes and newer models had names starting with 51. You can’t find older 50** models on Braun’s official website but they can still be found on various online marketplaces. Interestingly, the old series 5 also had a shaver named 5020s and was a dry-only shaver, but lately has been discontinued.

At this moment, the newer Series 5 50 has five shavers and these are essentially different configurations of the same shaver. They differ only in color and which accessories you can get with the shaver.

This series uses the prefix 50 and suffixes like S, CS, and CC. If you have been a Braun user, you would probably be familiar with S and CC configurations which basically indicate the presence or absence of a cleaning station. However, CS is a new addition and this essentially means a charging stand that provides you a platform for charging and has no cleaning function. In this new series, 5049cs and 5050cs are of CS configuration.

In this piece here, we will put this new series in general and the 5020s in particular under the microscope.

One obvious change is the new design. The second noteworthy point is the price drop. At a time, we can get the 51** and old 50** models at well over $100, these new models come well under $100. We will see whether this price drop comes at the cost of quality and shaving performance and what else this new shaver has to offer. So, let’s get started and put this new shaver to test. 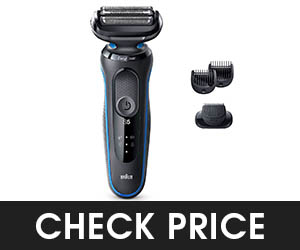 When we talk about design, the older Series 5 models had a rectangular shape and were mostly black in color. They had blue, red, or black accents on the sides of the front fascia and underneath the head. The design itself was rather dull and subdued.

In this newer iteration, we see a trendier design. The body of the shaver is roundish and slimmer. Aesthetically, the new design is definitely a pleasant change, but it still is nowhere near some of the better-looking Panasonic shavers such as ES-LT3N-K.

In the 5020s, we see blue accents that run on the sides and also make up the underside of the head.

Ergonomically, I like the textured rubber inserts on the back and the slightly curved shaft in the middle. This is further enhanced by its lightweight and big thumb insert on the front.

In the 5020s, the shaving head lies on a stalk which starts after a kind of dead-end to the shaft of the shaver. In older models, we see a continuity of the whole structure.

One of the upgrades is the new LED display. This display has some useful information. It shows indicators such as different battery levels by three dots. In addition, it shows if the blades need cleaning, travel lock enabled or not, and if you need blade replacement.

In summary, in terms of design and construction, we see some improvement. The new design is more modern-looking and its lighter weight with good ergonomics makes it quite user-friendly. It has more plastic than we are used to seeing in Series 5 and this is clearly one of the cost-cutting moves we see in newer models.

As said, the 5020s essentially has the same shaving head with three shaving elements. Therefore, we can expect similar performance. Nonetheless, on closer inspection, we see a few differences.

I have used the 5020s for around three weeks now and compared to my old 5145s it has kind of mixed results.

First of all, I like it for the fact that it has more protruded cutting elements. This provides better contact and requires a relatively lighter touch. However, this led me to sometimes applying more force than needed and this is where I noticed some heating up of the cutting elements. However, over the last week, since coming to terms with this fact I have not noticed any heating up.

As far as the closeness of shave is concerned, the Braun series provide a close enough shave which is adequate for most men. This is not what Braun shavers are famous for but they do the job pretty well. As the newer 5020s incorporates a similar shaving head, the results were at part with my previous Series 5 shaver. The blades are sharp enough to ensure you don’t have to make multiple passes over any given part.

When it comes to dealing with hair in the tricky areas like below the nose or lower lip, the bigger head of the new shaver was bit of a problem. This is where I feel old Series 5 had better results. It requires some getting used to and some maneuvering to get these areas done.

In the 5020s, one major downgrade is the flexibility of the head. Earlier models had flexible cutting elements and head. However, in the 5020s, we see that only foils move up and down and the head itself is fixed. This flexibility adds to the contour adaptability of the shaver and this is kind of a bummer in the newer shaver.

Where Bruan leaves its competitors miles behind is the comfort. Like previous models, the 5020s also provided a forgiving and gentle shave. The only time foils got hot was where I applied more pressure than was required. However, this was never the case with my previous Series 5 shaver. Therefore, the 5020s carry the legacy of providing a gentle shave but perhaps not as good as previous Series 5 shavers.

The wet and dry utility of the shaver also adds to its suitability for people of sensitive skin. You can use 5020s with shaving cream, gel, or foam and even in the shower. Pre-hydrating the skin and hair ensure easy shaving and cause no bumps.

You can attach these by removing the cutting block. Braun calls them EasyClick because they attach snap and don’t rattle when in use. I personally never liked the pop-up trimmer because of its awkward position and relatively flimsy construction. I like the newer attachments from the point of view of easy usage. However, they do carry the risk of getting lost.

In summary, I would conclude the shaving performance of the 5020s as good enough. It provides a shave which I believe would be good enough for most men but if you have wiry hard stubble, I would probably prefer an older series 5 shaver. It is as good at providing a gentle shave as has been the trademark of Braun shavers. Flat-lying, long and tricky areas may not be its best points, but overall it deals with them well enough. 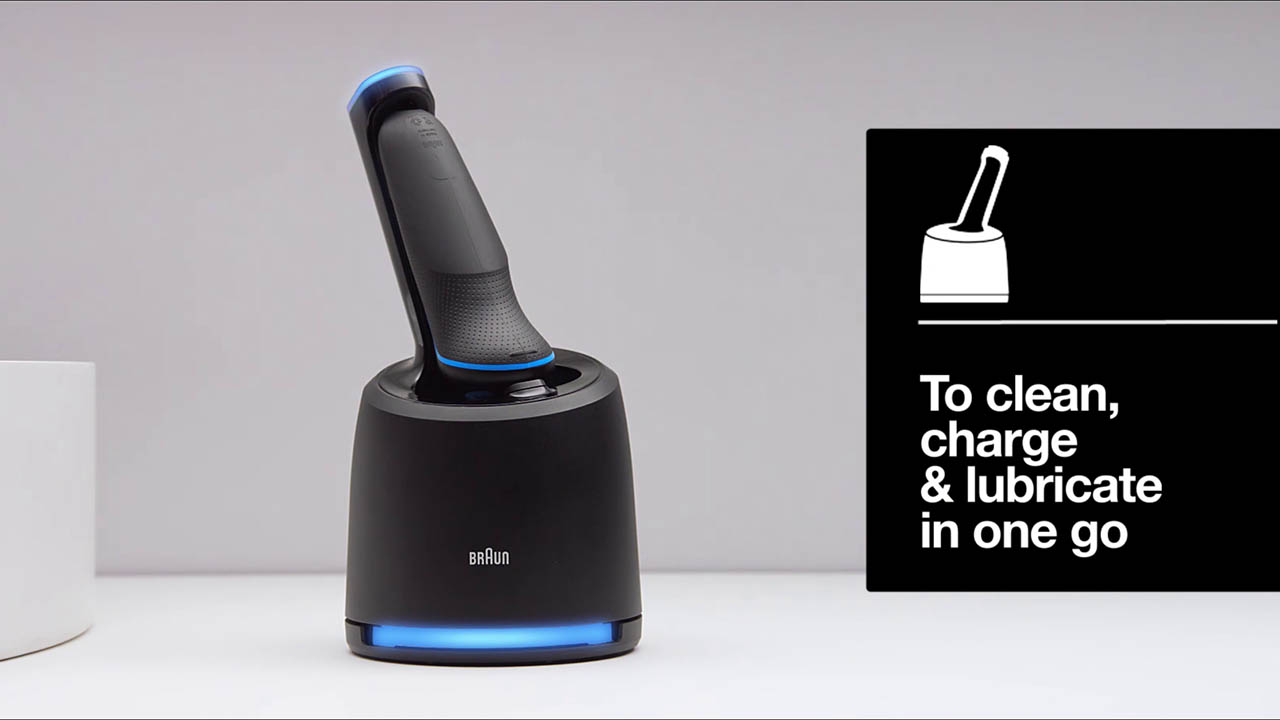 Braun 5020s incorporates a lithium-ion battery as has become the standard in most modern-day shavers. It consumes roughly one hour of charge and provides 50 minutes of runtime. This runtime is also on or around the pretty much standards these days.

However, if you get caught up, you can charge it for 5 minutes which can give you enough battery for one shave.

As you can tell, the 5020s carry the suffix “S” which means solo. This suffix shows that the shaver comes without a charging station. 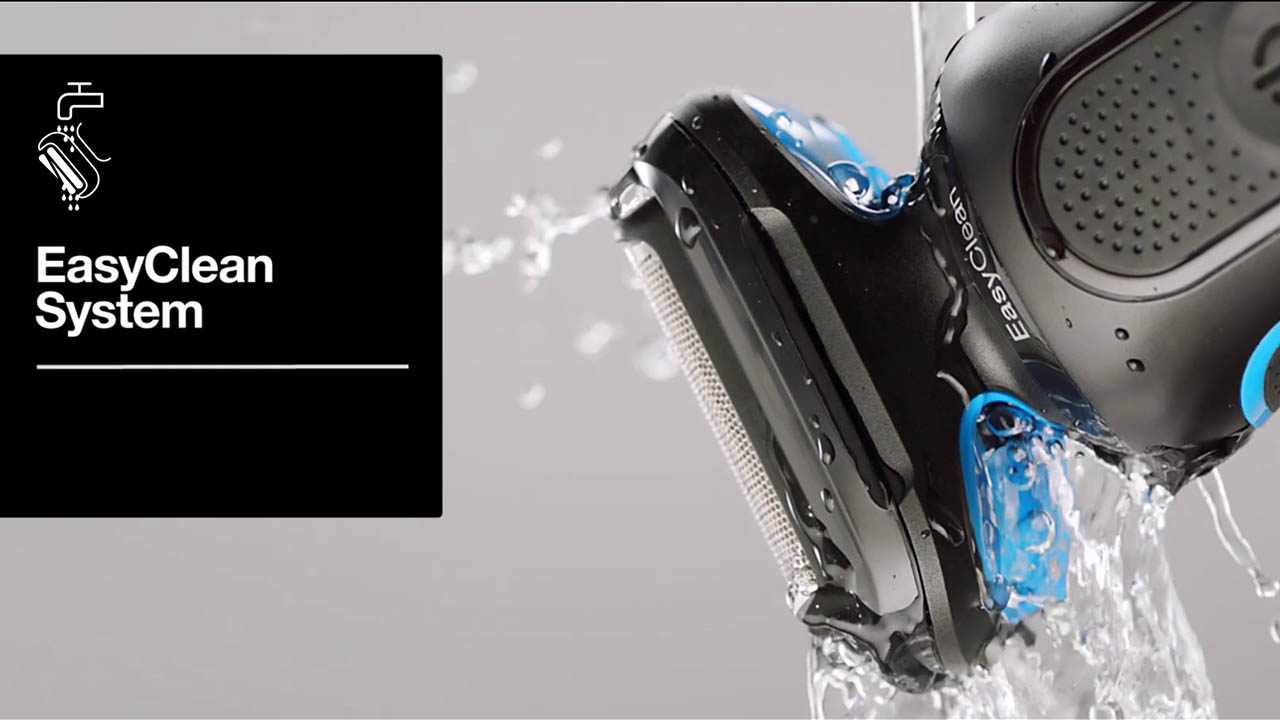 The biggest marketing point Braun utilizes for this new Braun 5 series is the new EasyClean system. This new series and 5020s utilize a new design change to ensure easy cleaning.

There is a fingertip-sized hole on the underside of the head where you need water to hit by placing it under a running tap. The pressure of the water then opens two flaps in the shaving head and this allows the rinsing of the blade.

This is a well-thought-out feature and performs really well. However, Braun probably is trialing this feature as we do not see it in the newer Series 7 models which were released around the same time. 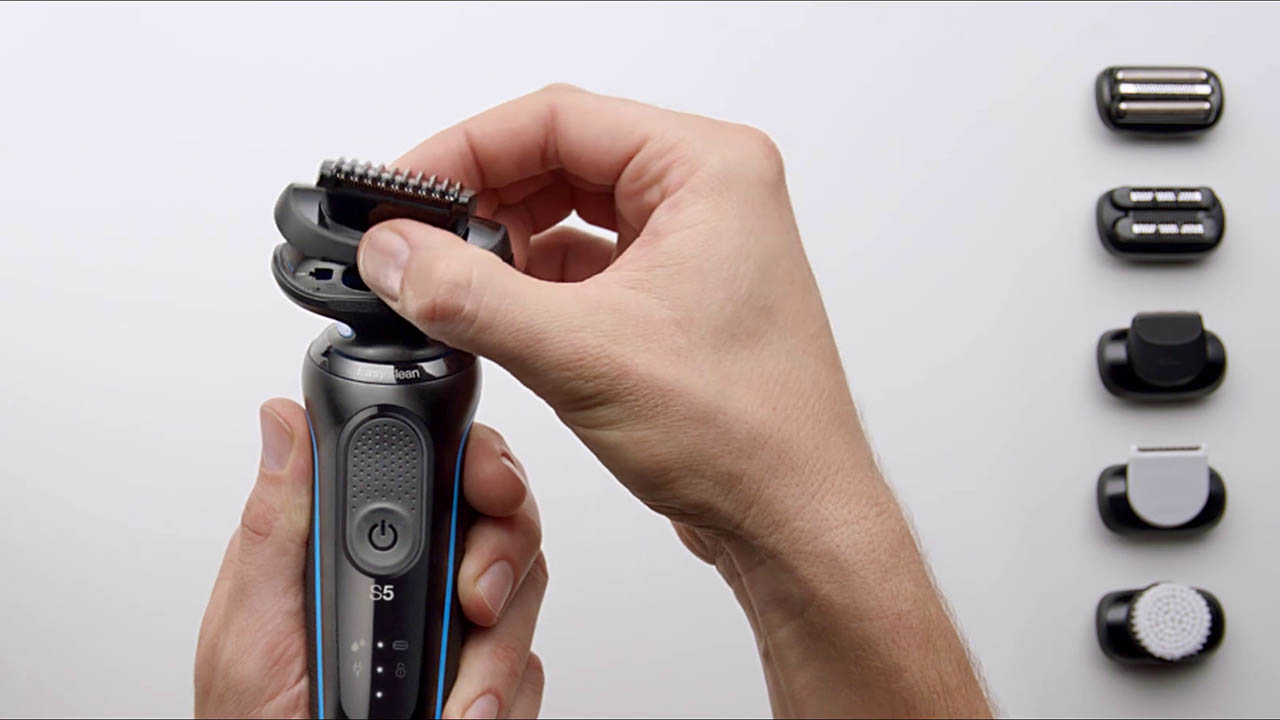 In the package you get: 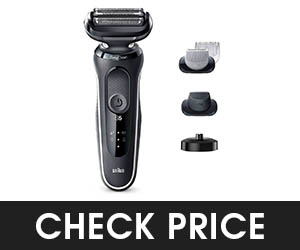 When we compare the 5020s with some of its siblings, there is not much to talk about.

All of these configurations incorporate a similar shaver and therefore you can expect similar performance. However, they differ in the color of the accents which run on the sides of the shaver. The same color makes the underside of the shaving head. In 5020S and 5018S, this color is blue, however, in 5050cs it is white.

5050cs is unique in the fact that it comes with a charging stand. You can basically place your shaver on this charging stand for its charge, however, you can also charge it without the charger. The other two shavers, 5020s, and 5018s do not come with any such stations.

It is noteworthy that none of the new Series 5 models so far has a cleaning and charge station.

All these models also differ in the attachments that they come with. Depending on the model you can get a precision trimmer, a stubble beard trimmer, a body groomer, and a cleansing brush.

Therefore, you can decide on which model to go with depending on your grooming needs. There is some price difference depending on the accessories you get, but it is not much and is not necessarily a deciding factor. 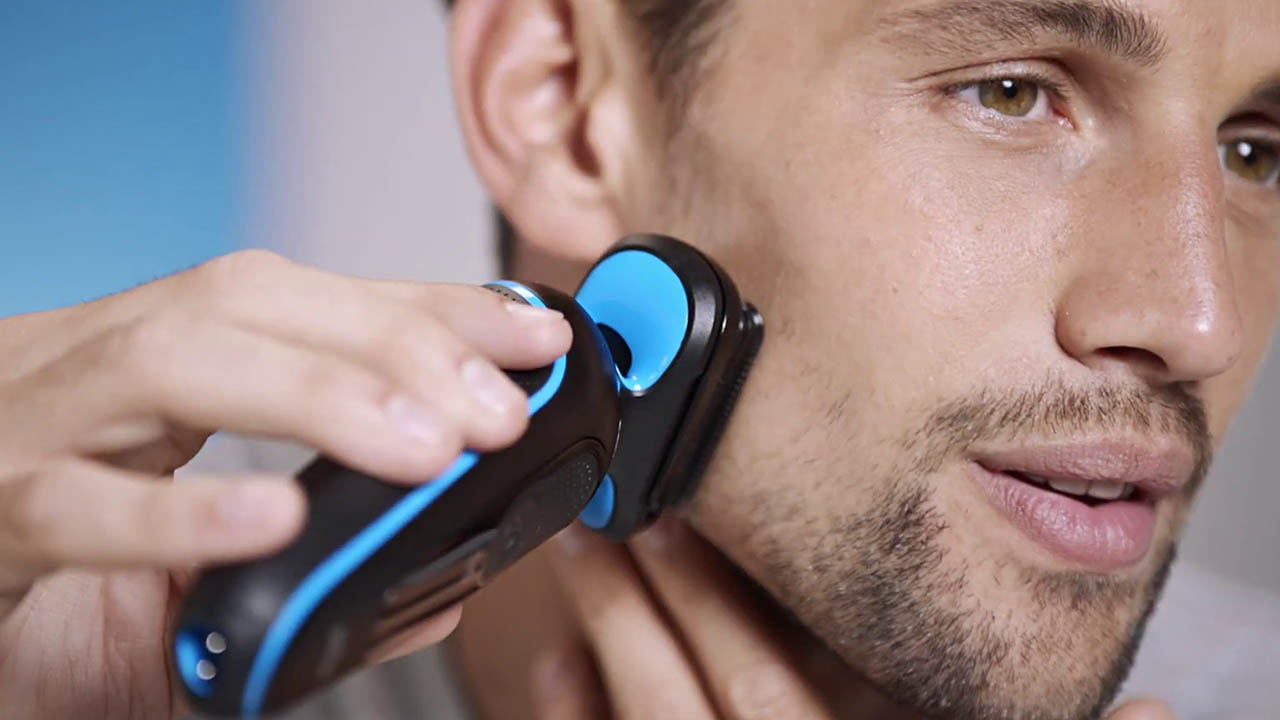 Over the years, Braun has received criticism for its higher price when compared to its competitors. In this newer series, we see a price drop which definitely is a pleasant change.

5020s has a much-needed newer design that competes pretty well with some of the better-looking Panasonic models. Although the construction of the shaver is not quite as robust as previous models, it looks well built and can last you some time. The ergonomics have received the major uplift with a roundish body and non-slip textured rubber inserts.

The new EasyClean system gives you the ability to clean without removing the shaving head and this would be quite a relief for some people.