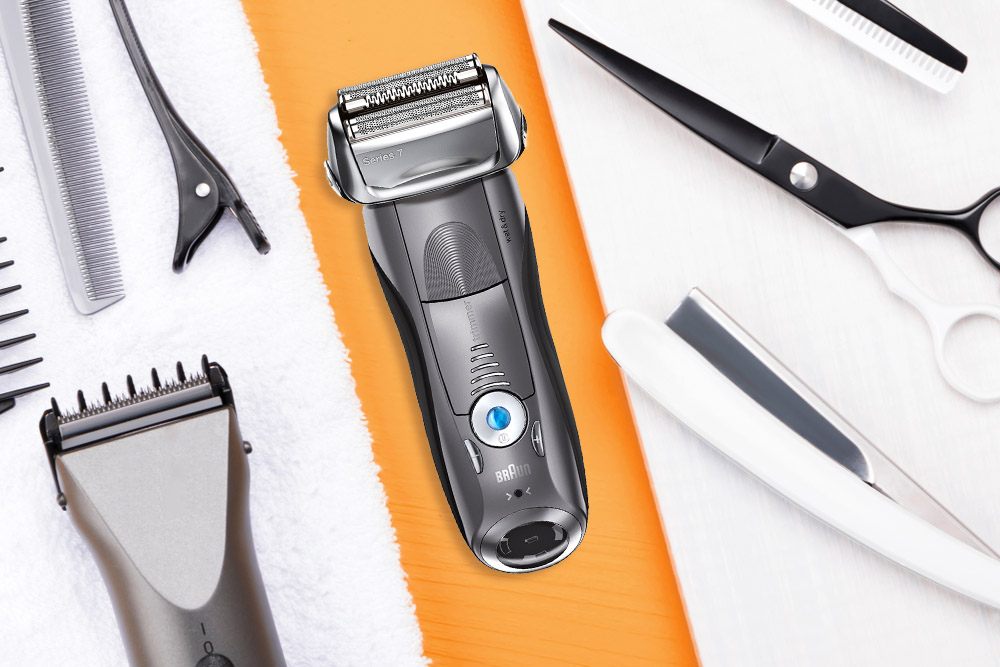 So, you’ve decided to spend your hard-earned cash and treat yourself to a good, reputable, and reliable electric shaver. But, time is money, so you can’t really spend countless hours sifting through specs and comparisons, right?

You’ve come to the right place, as I’ve fought the same battle recently and found just the right gadget for myself.

Even though it may not suit your needs as it did in my case, you still might want to read my Braun Series 7 7865cc review, as it’s the ultimate time-saver. Wish I knew all this when I was on the hunt for that perfect electric shaver a while ago.

Braun Series 7 7865cc – The Smart Shaver from the Future

The 7865cc electric foil shaver is a highly advanced gadget that’s loaded with the latest advancements in technology to make your shaving experience effortless and fun, or at least as fun as shaving can be. Let’s start off by checking the list of pros and cons.

While the Series 7 7865cc isn’t exactly Braun’s flagship model, it’s been one of the most popular electric shavers on the market for the past two years. If you’re looking for a quality gadget that will last for years and always provide an excellent shaving experience, this might just be the right one, like it was for me.

What’s In the Box?

Once you unbox the Series 7 electric shaver, you’ll be greeted by the shaver itself, along with a hard travel case, cleaning cartridge, cleaning brush, owner’s manual, and the automated charging and cleaning station that comes with its own AC cord.

Well Designed and Built to Last

The German manufacturer is known for quality and innovative products, so you wouldn’t expect anything else from the Braun Series 7 line of electric shavers. Right out of the box it looks sturdy and precision-built from high-grade materials. 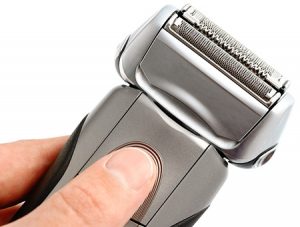 It looks understated and not as flashy as some other shavers on the market. But it feels agile in your hand and provides an excellent grip, which is great if you prefer shaving while taking a shower.

The only major issue I’ve noticed here is that the series 7 doesn’t feature a travel lock. Even though the power button requires quite some force enough, a travel lock still would’ve been a nice addition.

At this point in my review, I’d like to get you better acquainted with its main features. Like all shavers from the Braun 7 Series, this gadget is equipped with three separate shaving elements. 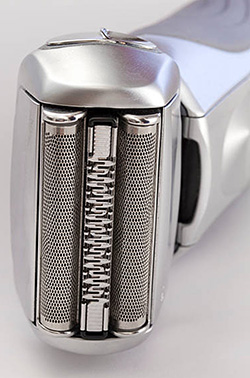 It has two foils, with a trimmer that’s positioned between them. The foils are very efficient in shaving shorter hairs that are closer to the skin, while the trimmer takes care of long hairs and those that lay flat against the skin.

Probably the best Braun shaver when you think in terms of value for money, the 7865cc comes equipped with Braun’s SyncroSonic technology, which moves the foils at 10,000 micro-vibrations per minute to capture even more hair.

There are now 5-speed settings on the series 7 electric shaver, which is a great improvement over the previous models which only had 3.

As is the case with other shavers from Series 7, the 7865cc has a flexible shaving head while all three shaving elements can be depressed individually.

It all sounds great in theory, but let’s dig a little deeper and see how it performs, shall we?

Does the Braun Series 7 shaver really shave as well as it is steeply-priced? In a word, yes. It gets the job done, and it definitely delivers quite a close shave. Keep in mind that no electric shaver can give you that completely close shave that a razor can, no matter how pricey it is.

Its motor is quite powerful so it will cut through the really coarse beard. As for the comfort, I’ve been through quite a few shavers and only a selected few can match the 7865cc. If you have sensitive skin like me, you’re going to love it.

The power settings are fine, but it’s best if you keep the Series 7 shaver at the highest “Turbo” setting.

As mentioned earlier, it can be used for wet shaving if you prefer that added comfort. 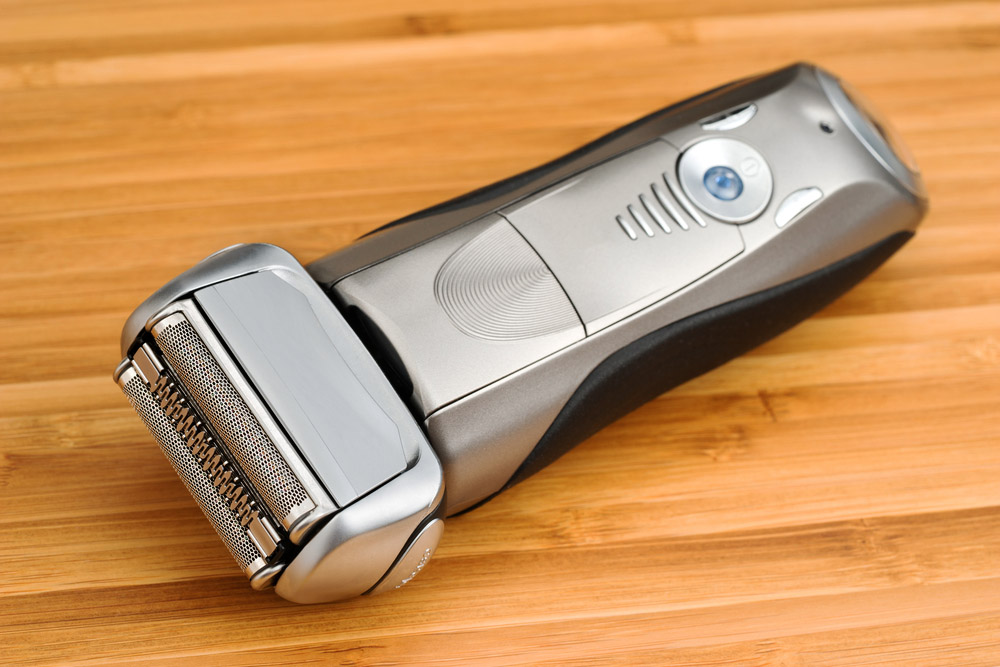 There is also a pop-up trimmer, but its performance doesn’t quite match the shaver. You might need to make several passes to get the cut you want.

What About the Juice?

In this part of my Braun Series 7 review, I’d like to point out that the 7865cc can only be used cordless, and when fully charged it will give you about 50 minutes for all your shaving adventures.

It takes only one hour to charge in full, but if you’re in a hurry you can always rely on the 5-minute quick charge.

Keeping It in Good Shape

It comes with its own cleaning station, so it makes the whole process of cleaning and maintenance a rather easy one.

Just use the station after a few shaves to get rid of all the clogged debris inside the shaving head cassette. There are three different modes of cleaning to choose from, depending on how clogged your electric shaver is. Depending on the mode, the cleaning process lasts from 3 to 16 minutes.

Since the station doesn’t have an active drying system, you will have to wait up to 4 hours for the cleaning fluid to evaporate.

Keep in mind that this cleaning station requires a cleaning solution that comes in cartridges. Each cartridge lasts about a month or two, depending on the frequency of use.

There aren’t any Series 7 replacement blades for the Series 7 shavers. You’d have to replace the whole shaver cassette with a replacement head. The company recommends that you replace the head every 6 months, supposedly the cutting parts become worn over time, but I don’t think you have to do that for at least 18 months or more.

At this point, I’d like to compare the 7865cc to what they have to offer when money’s no object. So let’s see how it holds up against the mighty Series 9. 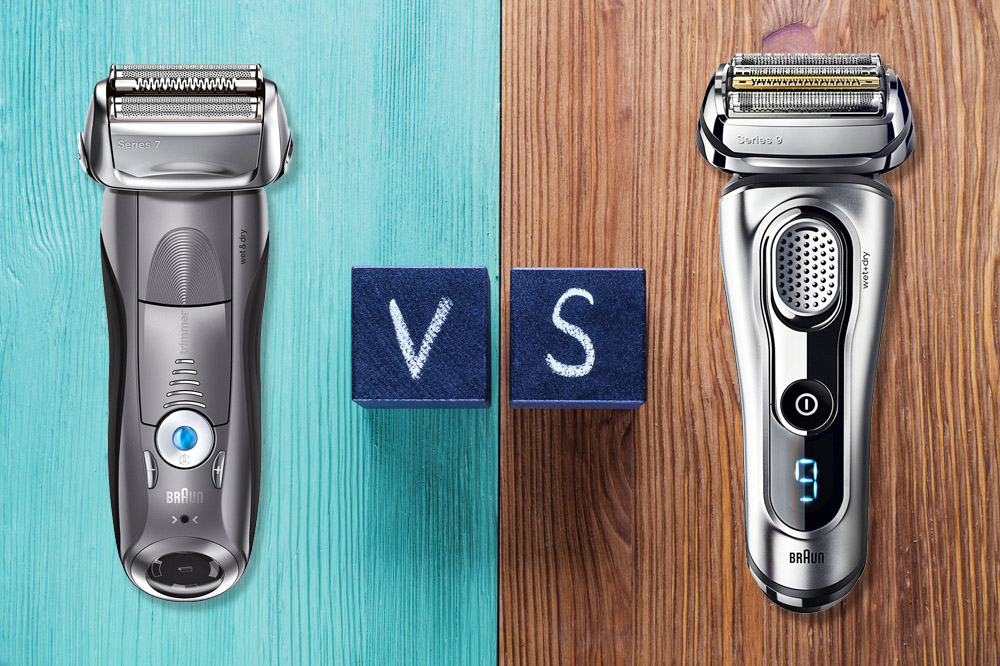 People tend to believe that the most expensive products are the best. Is it really always like that?

In terms of shaving performance and getting a close shave, the Series 9 does it a little bit better and with slightly less effort, due to the fact that its shaving head has 4 separate elements instead of 3.

Unlike the Series 7, the Series 9 doesn’t feature any speed settings but it somehow manages to provide a shaving experience that’s just a little more comfortable.

With both shavers, the shaving foil doesn’t get hot at all, but the Series 9 is simply unrivaled in terms of shaving comfort.

Some people will find it important to know that the Series 9 can give you a nice clean shave quite a bit faster. Obviously, the 4-piece shaving head is superior and the foils vibrate at up to 4 times higher but don’t forget the fact that it all comes at a price.

If your purchase decision is dictated by your budget, you should definitely go for Series 7. It’s not just the price of the shaver, but also the replacement parts you’ll need to purchase later on down the road.

In terms of cleaning and maintenance, they are very similar, although the Series 9 cleaning station does come equipped with an active drying system.

All things considered, the Series 9 is meant for those who want the ultimate in comfort while shaving. If you have really sensitive skin, this might give you a good reason to reach for Series 9.

Since it doesn’t really come cheap, I’ve decided that I’m quite happy with what my 7865cc gives me for my buck.

But, how does it compare to the more affordable Braun’s Series 5? 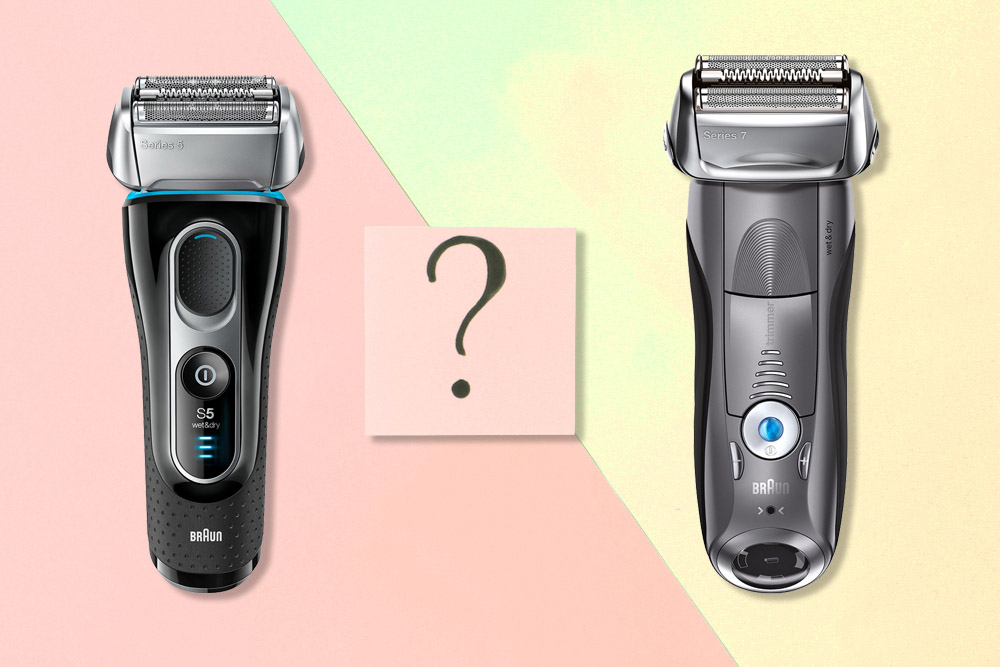 Obviously, Series 5 shavers can’t match Series 7, but are they really not even close? Well, first things first, even though the shaving heads are quite similar in appearance and they both feature three separate elements, the Series 5 lacks in comfort and precision as it doesn’t come with the pulsating Sonic technology.

They also come equipped with different motors, so the Series 7 gives you higher power and speed. The Series 5 has three-speed settings compared to five for the Series 7.

On the other hand, the series 5 looks a bit sleeker and it has a head locking mechanism that works better. It also comes with a travel lock.

All things considered, in my opinion the Series 7 offers better value for the money overall. 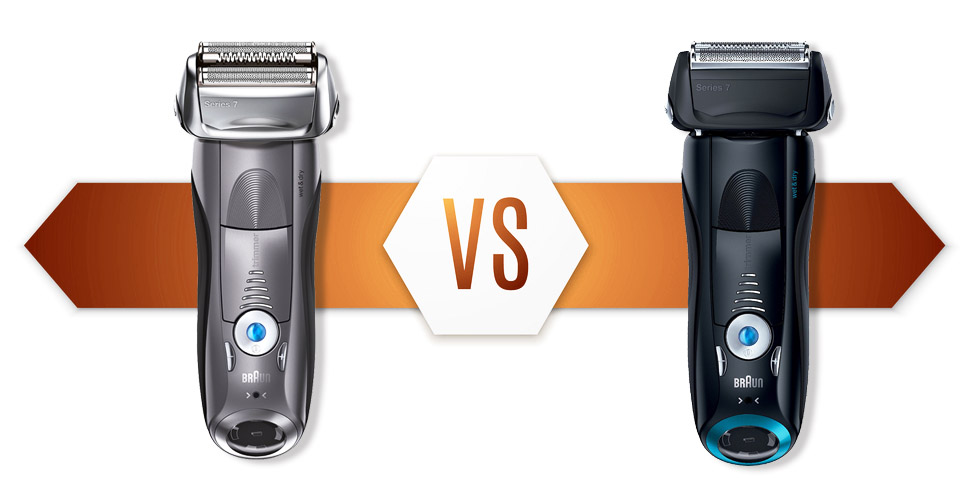 Even though I’ve picked the 7865cc as the one that suits my needs the best, let’s take a closer look at all the models from the Series 7 and see how they compare to each other.

Included in the fleet of Series 7 models are also the 740S, the 790cc, and the 760cc-4. They all feature the same shaving head with three separate shaving elements and they all feature the Braun Sonic vibration technology which provides that massaging effect while you shave.

Still, the 740S is an older model that doesn’t feature five different settings for customization – it only comes with three. Also, it doesn’t feature a cleaning station, so compared to our featured 7865cc its maintenance is much more of a chore. Also, it’s worth pointing out that the 740s can be used for both wet and dry shaving.

Getting down to the 790cc, it won’t bother you that much with cleaning and maintenance, as it features its own cleaning station, but it can only be used for dry shaving. If you like shaving under the shower, this one simply won’t cut it for you. And one more thing - it only has three different customization settings, unlike the 7865cc which has five.

Last but not least, the 760cc-4 is advertised as a shaver with four separate elements, but it is in fact not. It still has the same shaving head like all other Series 7 shavers. It does have its cleaning station and it can be used under the shower, but it still doesn’t match the customization capabilities of the 7865cc.

All in all, these are perfectly fine electric shavers with some really cool features, but the truth is none of them can really beat the 7865cc as a total package. 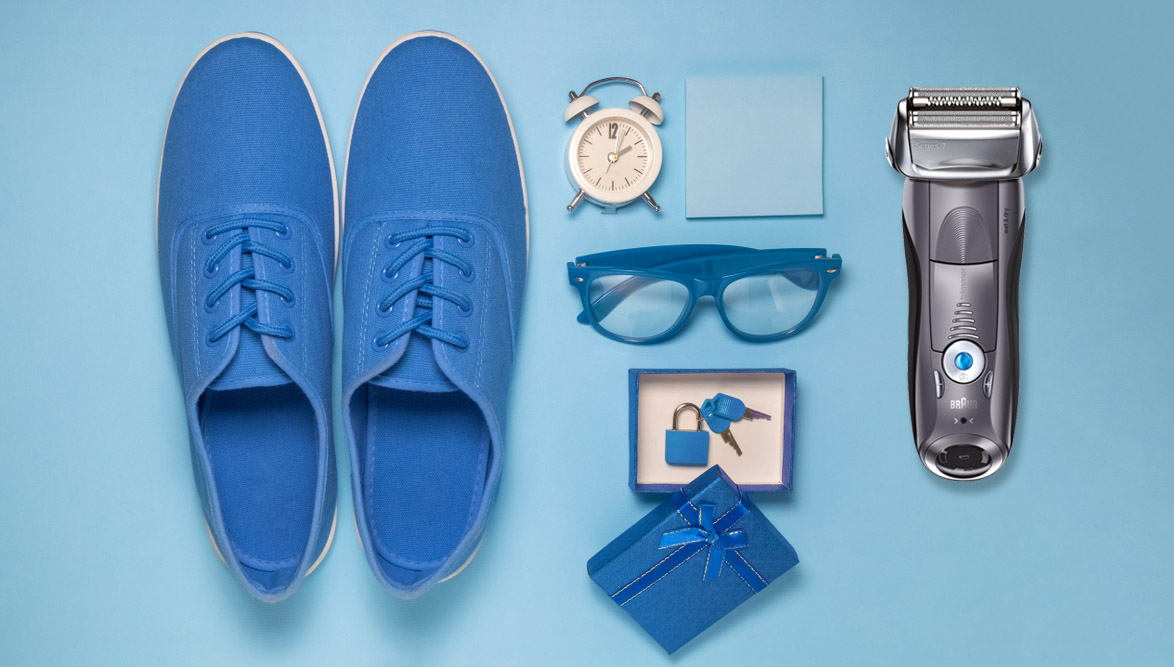 Hopefully, this review will help you choose the perfect electric shaver that suits your needs the most. Most of you will always be guided by your budget, but keep in mind that a good one doesn’t really come cheap and you will need to search really hard to find one that can keep up with the Series 7 7865cc electric foil shaver.