Home » Beards » What Do You Know About James Harden With No Beard?

James’ Harden’s legendary beard has become a part of his legacy. Like Harden, his beard has also grown into lore with every passing achievement. While he’s certainly not the first NBA player to grow the facials, he may be the first to embrace his beard to such an extent. Mind-boggling though it may sound, there was once a time when folks used to witness James Harden with no beard.

That’s because it didn’t exist yet.

In this article, we are going into the epic story of how facial hair became his style statement. Along the way, we will also reveal some lesser-known facts about him. So, read on! While studying at the Artesia High School in Lakewood, California, Haden had a silky smooth face. There are several videos of Harden in high school. In these videos, you can hardly recognize his clean-shaven face, though his aggressive gameplay is an instant highlight.

He had a sensational first year in high school, but the whiskers remained MIA.

With the start of sophomore year, Harden’s beard started to show some growth in the form of peach fuzz. Fast forward to the summer, and Harden had managed to wheedle a small goatee onto his face.

But, nothing noteworthy still.

College is the period that led Harden to hone his abilities. Like any college student, the most important being…. Laziness. James Harden in college was too lazy to groom himself every morning. So, the beard began to show its presence a bit more prominently, and he was able to grow a full beard.

Harden’s beard gave him strength. Its emergence coincided with his game attaining new heights of glory.

He was ASU’s first high school McDonald’s All-American since 1984, led his squad to a 21-13 record win, and earned first-team All-Pac-10. Though his beard was full and thick at that time, it was still far from the monstrosity we all know and love.

As Hyden went from his rookie campaign to second youngest Sixth Man of the Year Award during his 3rd season, the beard continued to grow. By the third year, his beard caught the attention of Oklahoma City Thunder fans. It slowly started gaining a sort of cult status, with pictures everywhere.

But, like his popularity, the beard continued to grow. Hyden continued his winning streak. The phenomenon continued to capture the imaginations of NBA fans. Thunders reached the NBA Finals. And… the beard helped America win the Olympic gold.

That’s when James Harden’s beard attained celebrity status. He’s going from excellent to exceptional and is currently the top player in the game. Coincidence? We think not.

Over the years, James Harden has sported some of the latest beard styles. However, the following got the most spotlight.

This is Harden’s signature look when the beard is at its highest form of 5 inches. As you can see in the picture below, the beard is in full glory, and Harden looks exceptional.

This is when happens when Harden gets his hands on a beard grooming kit. The beard looks slightly trimmed around the edges. It looks less scraggly, less lengthy, and excellent, as always.

This is what Harden’s beard looks like when it’s just left alone for a while. You can see the whiskers growing in all directions. You can tell he is a real bearded man.

Pictures James Harden Without a Beard

Below are some of the times when James Harden was spotted without his signature beard.

This was probably the first time he tried a stylish beard in his High School days. You can tell he looks very young and can also see slight patches on his beard. 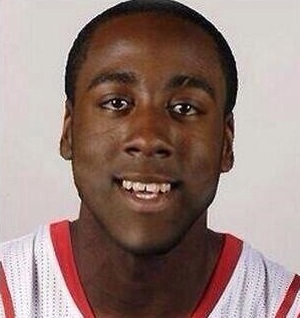 This is classic James Harden with no beard. As you can see, he was barely 18/19 then and had a natural baby face with smooth skin. This is probably the last time anyone saw him before the beard took over. He looks a bit more mature, but you can still see the babyface in him.

Will Harden ever Shave His Beard?

Back in 2009, during the NBA drafts, someone asked Harden whether he would shave his beard in the future. To this, the NBA star replied, “I’ll keep it for a few more weeks, but I might shave it to try something different… I’ll take it into consideration”. However, his fans were relieved Harden broke that promise and kept his iconic beard.

Then in 2015, Harden lost a bet with childhood friend DeRozan. In his bet, he lost his everything….errrr his beard. People were shocked by his clean-shaven and clearly younger-looking profile picture on his official Facebook.

Thankfully, Harden says he will not be shaving his beard again. None of the reasons to shave your beard will be a reason to convince him. Unless it’s for a worthy cause and the compensation is good (at least $10 million). His barber is the only person who can use a trimmer on his face, and for that, we can all now breathe a sigh of relief.

Why Did James Harden Grow a Beard?

In an interview with The New York Times, Harden’s former assistant coach, Irv Roland, Harden never grew his grandfatherly beard for a specific reason. His stubble grew into a beard because of his laziness in college. After that, it just became a symbol of his style.

What is James Harden’s Net Worth?

James Harden has made quite a fortune, like his fellow NBA athletes, throughout his sports career. According to Celebrity Net Worth, Harden’s net worth is estimated at around $165 million.

What is James Harden’s beard worth?

In an interview for TMZ, James Harden revealed that he would be open to shaving his beard for a good cause. In that case, he would charge $10 million.

Harden has never been married. But he has a girlfriend. He was previously in a relationship with the American supermodel Khloe Kardashian. Unfortunately, their relationship didn’t last for more than 8 months. Harden is currently dating Jessyka Janshel, a famous social media influencer, and model.

How Tall is James Harden?

James Harden is 6 feet and 5 inches tall. In metric units, it turns out to be 196 cm. That means he towers above most American men.

How Old is James Harden?

When did James Harden Get Drafted?

James Harden was drafted into the NBA on June 25, 2009. He was the third overall pick in the NBA draft, making him the first player to be drafted by the Oklahoma City Thunder franchise.

What Beard Oil does James Harden Use?

Well, it looks like Harden uses one of these beard oils for black men… but we aren’t sure. According to an article published in The Athletic, the Rockets Equipment Manager Tony Nila gave Harden a bottle of beard oil made by a Utah-based company. Unfortunately, we don’t know the name of the brand it came from. On the plus side, at least we know where James Harden stands on the Beard Oil Vs Beard Balm debate.

Where did James Harden Go in College?

James Harden went to Arizona State University, where he became a consensus All-American and won the Pac-10 player of the year award in 2019.

How Long Was James Harden and Khloé Kardashian Together?

James Harden and Khloe Kardashian were together for approximately 8 months. Their relationship started in June 2015, and the two celebrities split up in February 2016.

You can’t. No one can grow a beard like James Harden. It’s a once-in-a-millennia occurrence. However, you can read our guide on how to grow and care for a thick beard to get somewhat close.

Final Thoughts: A Beard to be Reckoned With

As James Harden continues his winning streak, his style and looks have become a hot topic of conversation for every sports fan. His breathtaking bristles got him contracts with Adidas and Trolli’s Candy, among others. Trolli’s Candy offers sweets shaped like Harden’s face and beard. He has also become an investor with The Beard Club to bring a fresh perspective to beard grooming.

While all the top NBA players enjoy lucrative ad deals, James Harden is the only one who brings it all in with the NBA’s most famous beard.