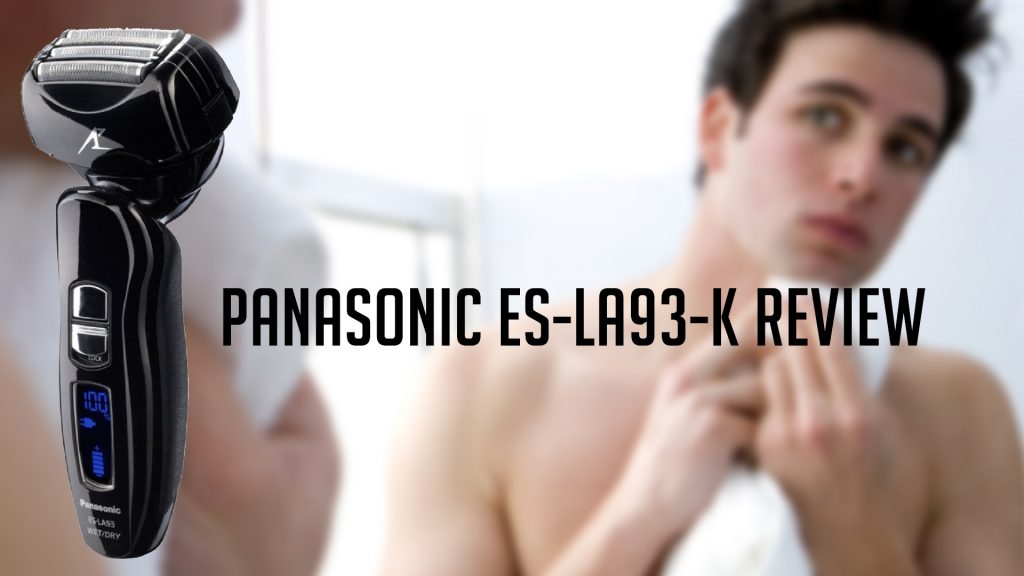 The Panasonic ES-LA93-K wet/dry electric shaver has been a hit since it debuted a few years back.

But let’s first agree that its initial full retail price tag was a major put off for most of us. Did you check it out then?

Luckily, Panasonic has now slashed its price by almost a half after unveiling its latest model, the Arc5, in 2016.

Here is the question in your mind… should you go for ES-LA93-K, or look at something else such as the Braun 7?

As you’ll soon find out in this Panasonic es-la93-k review, the arc4 is a real bargain regarding features, performance, and value for your money.

We also have a quick ES-LA93-K Vs Braun 7 comparison to help you make an informed decision. 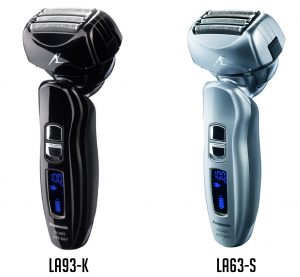 You must have realized that the es-la93-k has another version that resembles it in every aspect; the es-la63-s, right?

Let them not confuse you. These 2 are pretty much the same model regarding features and performance.

The major difference, however, is that the ES-LA93-K is black and comes with a charging and cleaning station.

The es-la63-s is grey or silver and does not include the charging station.

You might want to consider it if you are operating on a shoestring budget and don’t mind the automatic cleaning unit.

But considering its 30-dollar price difference, I would recommend you to get the ES-LA93-K and have the dock as a bonus.

This ‘Automatic Cleaning and Charging System’ does more than holding the electric razor while not in use. I’ll tell you more about it later in the section about charging and cleaning.

The ES-LA93-K Arc4 Electric Razor Review- what exactly is it?

A brief overview of the Razor 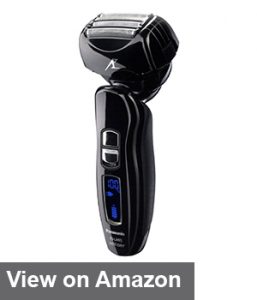 The Panasonic ES-LA93-K is currently the most advanced electric shaver in Panasonic’s Arc4 series. It sits rightfully between the Arc5 (the latest model) and the ES-LF51-A, its immediate elder sibling.

This electric razor uses a 2-motor system and 4 blades to supposedly offer you an impressively close shaving performance.

Being a wet/dry shaver, you can use it to shave with or without cream and even use it in the shower.

But perhaps the best part about it is its 360-degree rotating and innovatively designed head that you’ll also find in the recently released model, the Panasonic Arc5.

Its essence is to offer you an easy time as you shave the chin area and the jawline– something that we are all looking for.

What are its strengths?
Does it have any weaknesses?

Who should buy the Panasonic es-la93-k electric men's shaver?

Key Features of the Panasonic es-la93-k in detail

Shaver design- how does it feel in your hands? 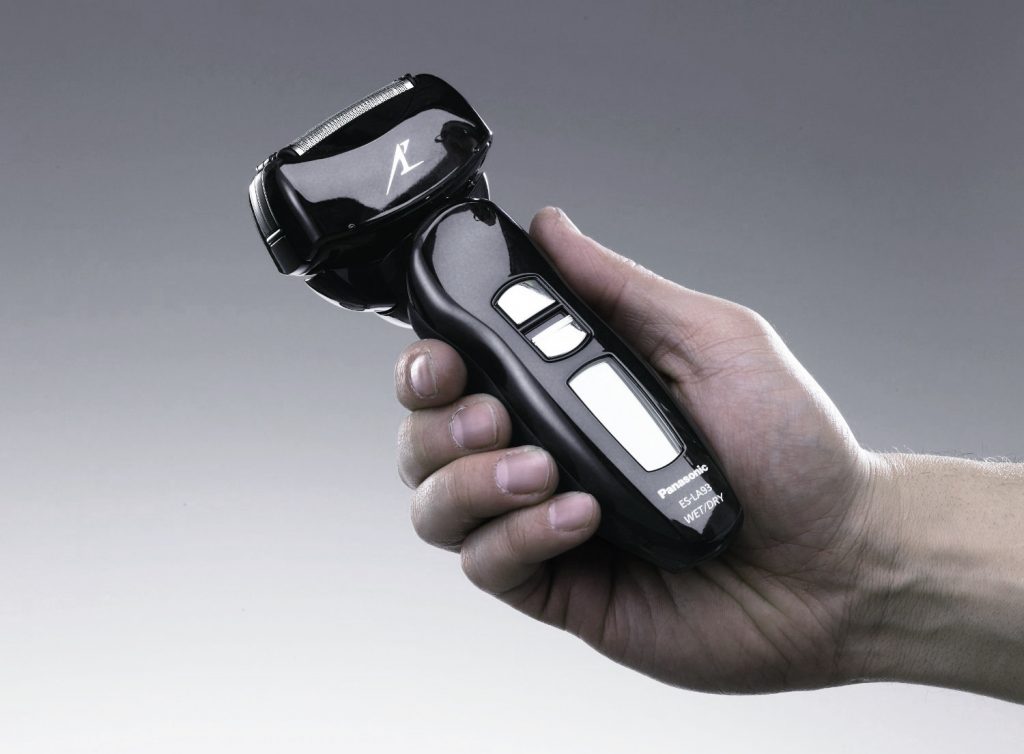 Although the ES-LA93-K won't beat the new Arc5 shaver regarding looks, it still has an impressively all-around slick and classy design that edges out the rather dull design of the Braun Series 7.

This shaving machine measures approximately 6.5 x 2.7 x 2.2 inches and might fit nicely in most people's hands.

To emphasize its already appealing design, the ES-LA93-K weighs around 0.44 ounces which is way lighter than several other high-end units. Again, all the controls are within reach and are easily accessible as you hold the shaver.

In my opinion, this design makes it quite comfortable and natural to hold.

Has a slightly bulkier head- does it make it or break it?

Worth pointing out is that the Panasonic es-la93-k has a slightly larger shaving head. I imagine you might find it quite massive on your face especially if you are migrating from a razor or a 3-blade electric shaver like the ES-LT41-S Arc3.

But I bet this odd feeling will subside once you get a good hold of the shaver.

Multi-flex pivoting head- this is where it gets better! 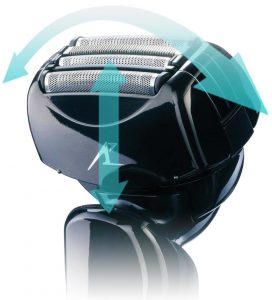 No, this is not a rotary head shaver. The thing here is that the head pivots back and forth and side to side smoothly.

Even better, each of the 4 blades flexes independently of each other in response to your facial contours.

These highly flexible blades and multi-flex heads mean that you might be able to glide over your skin with a bit more ease and confidence.

To add to this, the head features a gentle curve that might allow you to follow your facial curves including the jawline with much ease too.

Which is your best shaving method?

With a 360-degree rotating head, I bet this electric razor will make a great choice for almost anyone looking for the best Panasonic shaver for men regardless of their shaving method. 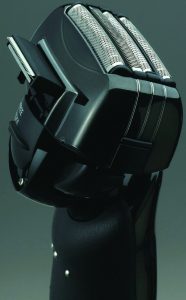 What I like is that you can shave with either up and down and sideways motions.

You could also move it in circular motions as you do with a rotary electric razor. The only difference here will be that you'll be getting a smoother and closer shave than you'd get from a rotary razor.

A pop-up trimmer at the back also makes this Panasonic shaver pretty much recommendable if you want something that will give you a precise finish when trimming your sideburns, mustache, and beard on a daily basis.

Notably, there is also a switch at the back of the head that you could use to lock the shaving head if you don’t want the back and forth movements.

It comes in handy when you need more precision, for instance, when shaving the area under your nose.

As I told you before, this shaver has a considerably larger head than former models from this manufacturer.

This is because it uses a 4-blade cutting system and 2 Hyper Performance Motors. Worth mentioning is that the linear motor now makes 14,000 rpm which is a slight improvement from the previous model that made 13,000 rpm. 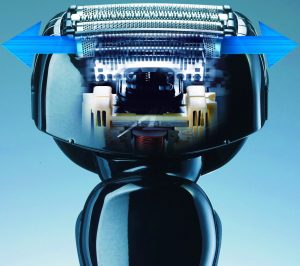 It isn't a huge improvement, but it makes the es-la93 arc4 Panasonic a little bit more powerful. Mathematics-wise, this shaver offers you a total of 56,000 cross-cutting actions each minute (4x14,000).

This performance makes it much faster than the Braus 7. In addition, this speed coupled with the fact that this is a foil shaving machine may lead to fewer strokes and greater coverage.

This may again lead to less irritation on your sensitive skin since there won't be the tugging and pulling of hairs that most slow-speed shavers cause.

Another reason why you might not experience razor burns with this shaver is that it has a powerful vibrating motor in its head.

Its sole purpose is to cause vibrations on the ultra-thin outer foils to lift the hair up for snipping down to the skin. The advantage here is that you won't have to press the shaving head so hard against your skin.

This minimizes the chances of razor burns even further.

It gets even better!

I would also like to mention here that the Panasonic ES-LA93-K electric razor for men uses hypoallergenic blades to alleviate discomforts.

The good news here is that the blades are made of stainless steel, not the cheap nickel that we find in most low-end gadgets.

What do you prefer, a dry or wet shave?

You might also like that this Panasonic es-la93-k offers both dry and wet shaves. This feature is a big deal although it is not unique to this shaver alone.

It means that you don't have to lather up with gel or cream every time you want a shave. It also means that you can use it in the shower- don’t we all love this?

However, as Matt McMillen advises in these men’s shaving tips, I would highly recommend you to use gels, creams, or soap especially if you have sensitive skin.

Now, the es-la93-k shaver offers 2 charging options. You could use the provided cord or dock it in the 'Automatic Cleaning and Charging' Station.

What I really like about the cord is that it has a universal voltage function. This means that you can travel with your shaver internationally without lagging behind the docking station.

Do know that some shavers, for instance, the Braun 7526 Syncro won’t charge without the docking station. You can imagine how inconvenient this can be when traveling, right?

The Panasonic ES-LA93-K electric shaver takes about 1 hour to charge fully. It will then offer you up to 45 minutes of shaving time. 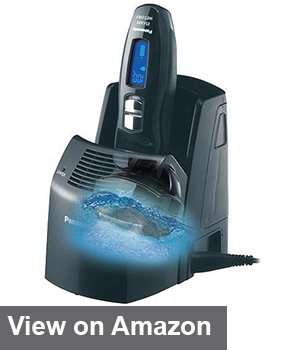 This might seem a short time. But considering that a good shave takes utmost 3 minutes, you'll be assured of 12-15 shaves per charge which might be still very much okay.

There is intuitive silver ON/OFF button on the handle. A lock button just below the power button prevents the shaver from turning on in your luggage.

Another interesting feature here is a 10-stage blue-lit LCD display. Among its other functions, this display will alert you on the remaining battery capacity and when you need to clean the Panasonic shaver.

Vortex cleaning system- this is why you should get it

The cleaning unit uses a cleaning cartridge and water to clean your shaver using supersonic vibrations. Uniquely, there isn't much to do on your part.

You just need to plug it in and dock the machine head down into place and select what you want the unit to do with the 2 buttons. A status led to the left alerts you on the stage that the cleaning performance is in.

You could also clean the razor manually by removing the head bracket (pulls out easily, by the way) and then use the Panasonic shaver cleaning station to dry it.

What do you get in the package? 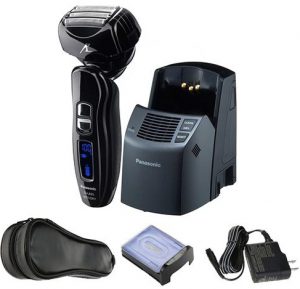 The travel pouch is a really good thing to see here. Unfortunately, it only accommodates the Arc4 shaver.

So, you'll need to spare some space for the corded charger in your luggage. This isn't a big issue, but it's worth pointing out to avoid inconveniences.

How does the Panasonic ES-LA93-K compete with other shavers?

If I were to compare this shaver to another competitive electric razor on the market, that would be the Braun Series 7 7865cc Electric Foil Shaver. This model works similarly to the 790cc shaver but has a few features to add to its performance.

In comparison to the ES-LA93-K Shaver, the 785cc Silver has notably lower cross-cutting actions per minute. It uses 3 cutting blades that offer 10,000 rpm giving a total of 30,000 rpm.

It also has a contour flex head that moves in 8 directions and a skin guard to protect your skin.

It might, therefore, give you a close shave without causing irritation.

The Panasonic es-la93-k is, in my opinion, the best electric foil shaver in its price category this year. The shaving machine comes with about every feature that you could ask for in a mid-to-high-end shaver including impressive cordless running time, a pop-up trimmer, and an automatic charging station.