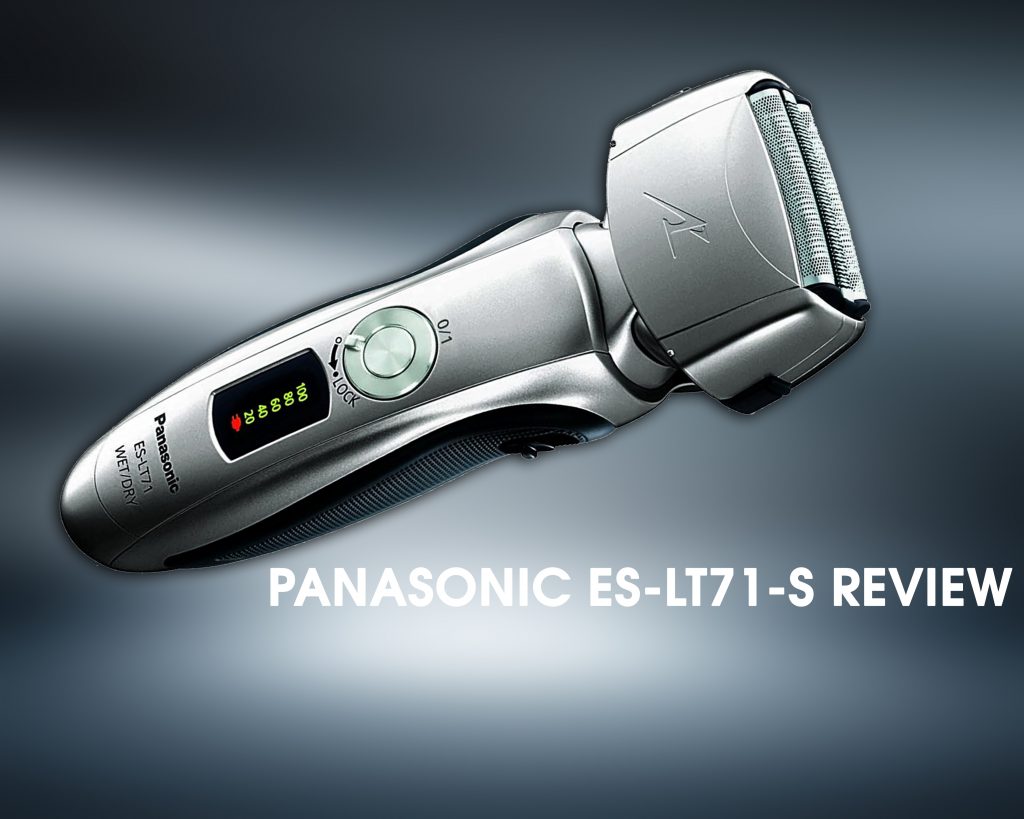 I’ve been shaving since I was 19 – I was a late bloomer – and since day one, my shaving routine has been in a state of the constant struggle between electric shavers and razors.

I’m not too proud to admit that there was even a dark chapter in my life when I thought it’d be cool to use a straight razor. Do you have any idea how long that takes?

You have to make sure the blade is sharp, heat up the lather, then be super careful that you don’t slice your own throat. I was getting up an hour early every other morning just to shave! But I digress…

I’ve been through my fair share of male grooming products. I’ve gone from high-end, top-of-the-line, special order electric shavers, all the way down to bargain store disposable razor blades, and just about everything in between. I’m constantly looking for the best shave possible.

For the Excalibur of shaving devices. The one product that will end my search and bring about an era of love and prosperity for all males that have passed through the gauntlet of puberty and entered the realm of manhood! You might even say that I’m obsessed with this endeavor.

Many people have. My own wife is one of them. But to them, I say “Phooey!” and “Pshaw!” Shaving is what defines us as men and separates us from animals! Why shouldn’t I find the best possible way to remove the hair that is constantly encroaching on my face?

So what makes a great shaver? For me, it’s the three S’s, speed, smoothness, and slice-ability. Speed is the first quality and it’s an easy one to explain. I’ve got to shave every other morning, and usually when I’m already late for work.

I need a shaver that doesn’t leave me standing in front of the bathroom mirror for hours on end. Smoothness is also pretty self-explanatory. You know why you’re really shaving, right? Because your wife, or girlfriend, or lady you picked up at the bar wouldn’t let you anywhere near her if you didn’t.

Ladies might claim they like the look of a rugged man, but when it comes time to get close they’re looking for a smooth face to snuggle up to.

The last quality is slice-ability, and yes that’s a word I made up. You know that feeling you get when you’re using a dull razor or an electric shaver that’s lacking in the power department? That feeling of the blade cutting the hair, but not through it, and then ripping the hair out by the root?

That’s got to be one of the most painful experiences a man can go through, and I don’t like it. That’s why “slice-ability” is a major selling point for me when purchasing a shaving device. I want something that’s going to cut through my beard hair like a samurai sword wielded by Keanu Reeves. This brings me to the Panasonic ES-LT71-S Arc 3. 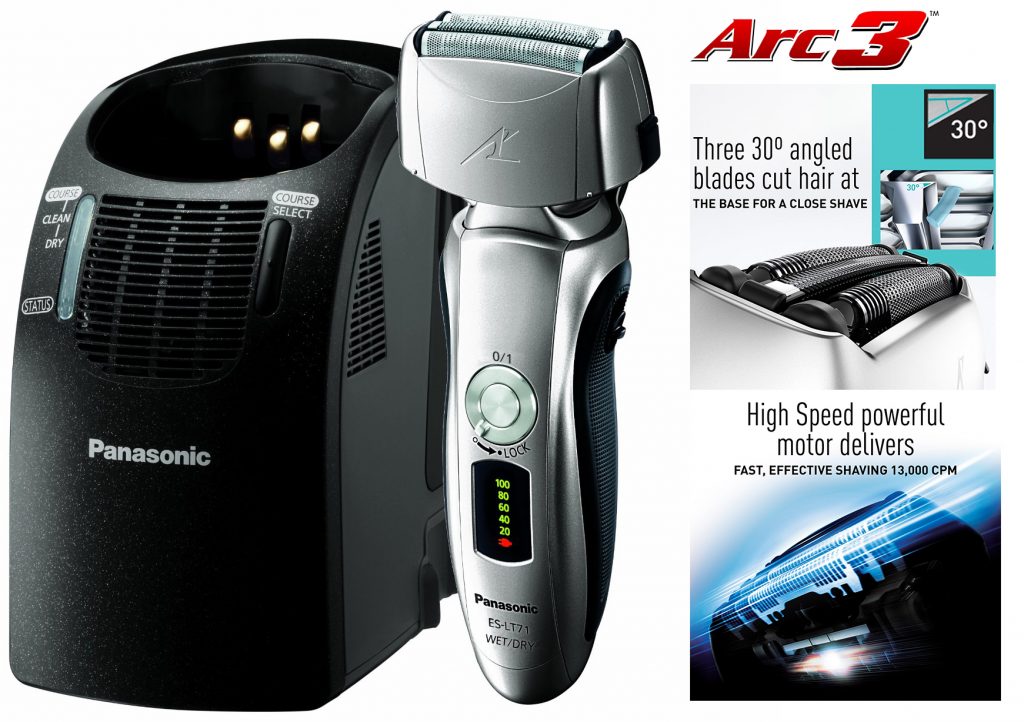 Honestly, it was just a matter of time. Electric shavers have been improving year after year and razors can only do so much. How many blades are you going to add to your “Mach Infinity” razor before it just becomes ridiculous? The Panasonic ES-LT71-S Arc 3 was recommended to me by a friend and at first, I was a little apprehensive, especially with a price tag of over $100. In the end, I figured what the hell, I can always return it if I hate it.

I did not hate it. And here’s why. The Panasonic ES-LT71-S Arc 3 was the closest shave I’ve gotten with an electric shaver to date. I did a little research and found out the engineering that went into this bad boy is on par with the SpaceX rockets.

It might only come with three blades, but they’re 30-degree Nanotech blades (Nano means small, and small means good when you’re talking about razor edges) that are powered by a 13,000 CPM linear motor drive, making this one of the most powerful shaving devices on the market and certainly the most powerful anywhere near this price range.

So, speed? Check. The Panasonic ES-LT71-S Arc 3’s power and microscopically sharp blades meant that I didn’t have to run the electric shaver up and down, back and forth, over and over my face in order to get a good shave. Once and done, just like a razor.

Smoothness? Semi-check. It wasn’t as smooth as a razor, but it was pretty damn close. Definitely closer than I’ve ever gotten with an electric shaver before. And slice-ability was on par with that of a brand new razor. There was absolutely no painful tugging or pulling whatsoever.

Another cool thing about the Panasonic ES-LT71-S Arc 3 was the fact that it’s waterproof, meaning I can take it in the shower, it’s easy to clean, and it’s no big deal if I drop it in the toilet, considering I remembered to flush that is. In all seriousness, I love to shave in the shower and the fact that I can with the Panasonic ES-LT71-S Arc 3 without breaking it or electrocuting myself is awesome. 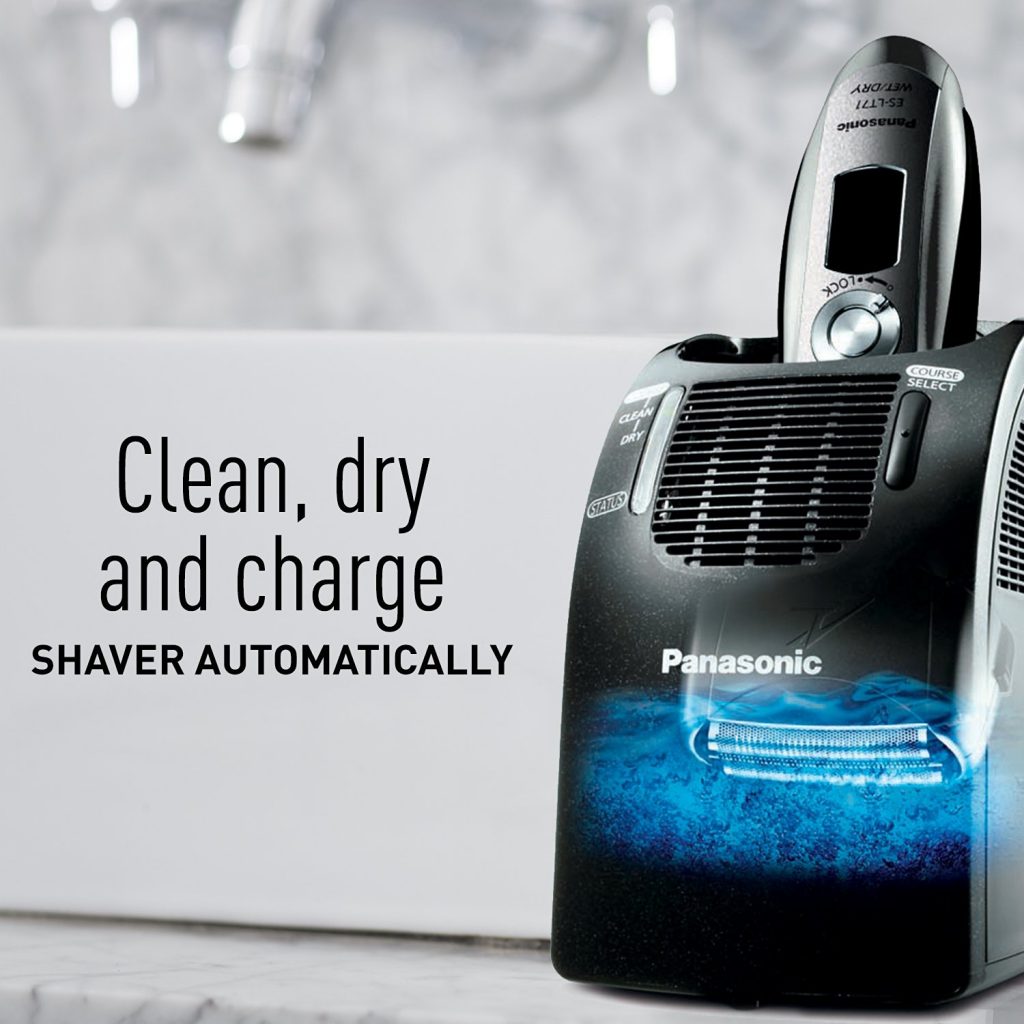 The Panasonic ES-LT71-S Arc 3 comes with a cleaning and recharging base which is convenient, but you have to buy the cleaning fluid separately, which is not convenient but what are you going to do.

There’s a LED display on the handle so you always know how much charge you’re working with, but I just made it part of my routine to plug it back into the base when I was done using it. I did forget a couple of times, but the next day I still had more than enough charge to power through the dense forest of testosterone that is my facial hair.

The pivoting head was a nice touch, as was the pop-up trimmer, but honestly, those are quickly becoming standard features for most new electric shavers. Buying one without them would be like buying a car without a radio and cup holders.

That being said, I’ve seen plenty of electric shavers on the market without one or both of those features, which makes no sense to me. If you’ve ever tried to shave using an electric shaver without a pivoting head, you know that it’s basically impossible. There are just way too many curves on the human face and neck to not have something that can move with you.

The only way an electric shaver without a pivoting head makes sense to me is if you selling to the block people on Minecraft. And the trimmer? 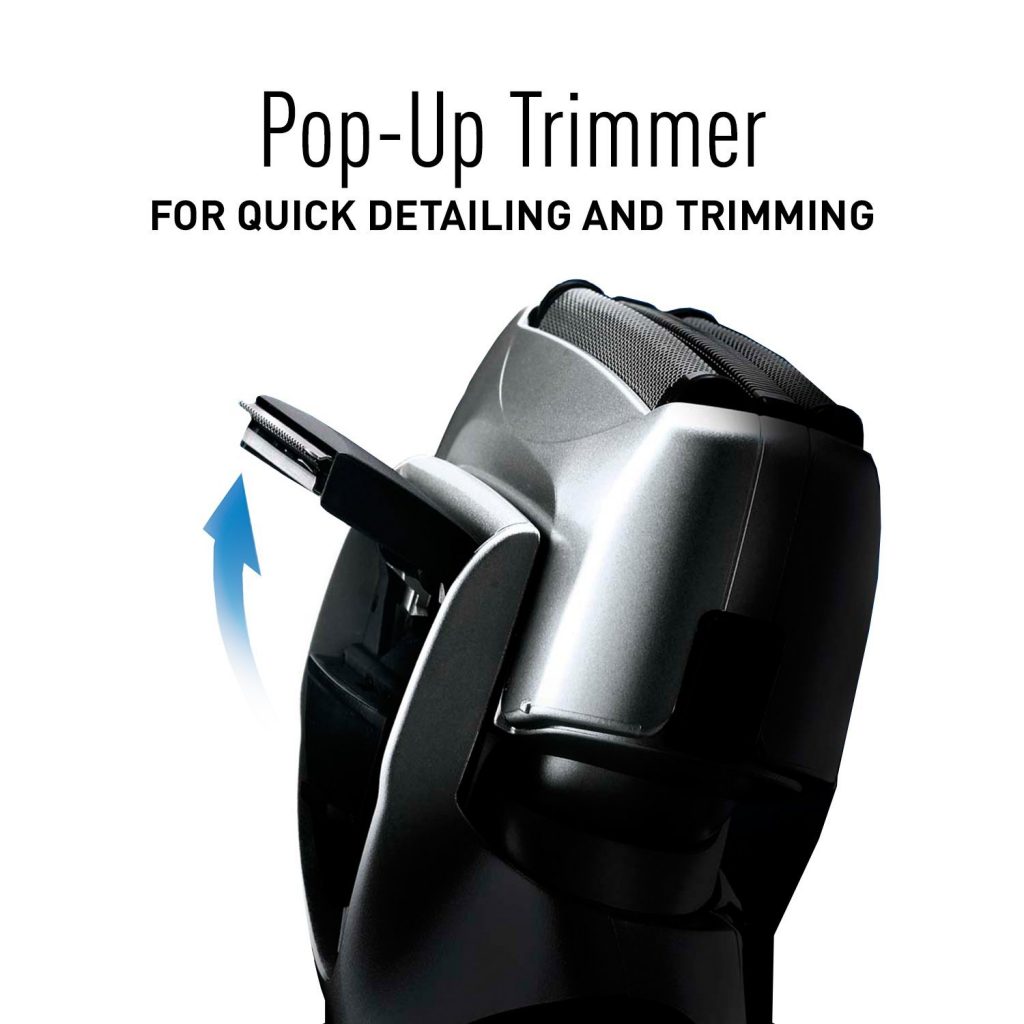 What are you going to do without a trimmer? I’ll tell you what you’re going to do. You’re going to try and shave your sideburns without one, mess it up horribly, and look like a moron for the next two weeks. Good luck getting laid with one sideburn that goes down to your neck and another that’s non-existent.

Then you’ll go out and buy a razor just to shave your sideburn or goatee or whatever you’ve got and realized that buying an electric shaver plus a razor is too expensive and that you might as well just use the razor. That’s just silly if you ask me.

So what don’t I like about it? Well, cleaning the cleaning station was a little difficult, which might sound like a stupid problem unless you have OCD in which case it’s a major problem! It really wasn’t that bad.

You have to buy special cartridges with cleaning fluid in them and replace the old ones about once every couple of months or else it starts to smell funky. The trimmer doesn’t work great, but it works. It’s not the shining star of this product, that’s all I’m saying. Maybe with the next model they can spend a little more time on it.

The real selling points of this product are the wet/dry feature, the power, and the price. Sure, there might be better electric shavers on the market. 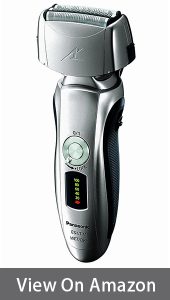 Most of them are used by professionals to shave “Yeezy” into your head and not for everyday grooming, but yes there are better electric shavers out there. For this price range, you’re looking at one of the best available products. I’m not saying this is the end-all, “never buy another razor again” product for me, but it will be my weapon of choice for the foreseeable future.

All in all, it’s a good product available for a reasonable price with some really amazing features. After using it for a few months now I can see why my friend recommended it to me, and if you give it a shot you’ll probably see why I’m recommending it to you.